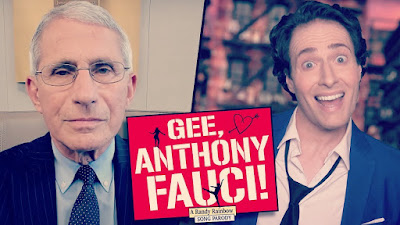 For awhile, I stopped religious posting Randy Rainbow videos, since I didn't want to be all Randy all the time.

But I can't resist.

Last week, Rainbow borrowed from Stephen Sondheim and Leonard Bernstein with his take on "Gee, Officer Krupke" from "West Side Story."  Sondhein and Rainbow are enthusiastic fans of each other, so why not?

Don't worry, Rainbow doesn't have a problem with Fauci. He's begging the good doctor to save us from lots of other idiots.

By the way, Rainbow hasn't been able to have a hair cut in five months, but his do still looks fabulous. Just saying.

Posted by Matt Sutkoski at 11:43 AM No comments:

These are people I absolutely rely on as this depressing, awful, horrible pandemic roars on.

LIke everybody else, I get anxious, depressed, angry, frustrated over the way things are, the bad direction the nation is going in, and the so-called leaders who have utterly failed us.

Negative emotions like this are not sustainable. The wear you down, and you become brittle and hostile and standoffish and not somebody you want to be around

So you look for an antidote. The best way to do it, at least for me, is to just embrace the gallows humor the current situation has us in. Which is why these three people are my lifeline.

You can look Cooper, Nolke and Rainbow up on social media. I have featured all three on this here blog thingy before, but it's always good and to highlight them again.  Maybe they can be your lifeline

First, here's Julie Nolke with Anna Akana in "Pandora's Box"  We watch Pandora and Zeus having a Zoom meeting. And it is the ultimate example of a bad, stereotypical mess up of a corpoerate meeting between a boss and underling.

It turns out, both are culpable here, and it's a parable of how the leaders and their middle managers are incompetendly mucking up our lives.

I know many people will disagree with me, but Donald Trump's voice just grates on me. I clench my teeth every time I hear that idiot spout his word salad.  Sarah Cooper comes to the rescue with her delicious lip syncing of Donald Trump.

And who can forget Randy Rainbow? I've stopped posting every video he puts out, like I used to, because as much as I love Randy, I can't be exclusively a Randy Rainbow fan club. It's so easy to ind his videos anyway.

Between his singing talent, his top rate ability to throw shade, the lyrics, and the ideas, and his pretend participation in news conferences, you can't beat him. He also has an encyclopedic knowledge of songs he can tap to turn into his perfect parodies.

And his naughtiness.  I'll spoil a joke because I love it so much: Rainbow sings that lately all his rallies and events are like his sex life: Nobody comes.

Posted by Matt Sutkoski at 1:04 PM No comments:

Believe it or not, the ad you'll watch at the bottom of this post is a real TV commercial. It's also an absolute work of art.

It actually came out a decade ago, but is enjoying some new viral fame out there on social media.

It's an ad for Cullman Liquidation, a purveyor of used mobile homes. I checked, and it IS a real business.

The proprietor of Cullman Liquidation introduces us to his team, and gives us some intriguing personal biography.  For instance, he tells us, for no apparent reason, "My wife's boyfriend broke my jaw with a fence post."

There's quick cuts to the team looking menacing, a woman smoking a cigarette and a few sound effects. It's really a terrific short film.

Producers of several "reality" shows contacted the company pitching a show, but they turned the idea down, which is probably kind of smart.

Posted by Matt Sutkoski at 11:43 AM No comments:

Harrowing Hudson River Is The Video You Need Now. Seriously

You probably need a feel good story right now. I do.

Don't worry about the beginning of this story, because, spoiler alert, you'll like the way it turns out.

Inside Edition reported on what they call is a harrowing rescue along the Hudson River in Hoboken, New Jersey recently.

A toddler named Thomas, who is almost 3 years old,  lost his best friend, "Teddy" who fell into the river while he and his mom were taking a stroll.

A heroic rescuer appeared on the scene, found Teddy floating in the river, retrieved him and performed some dramatic CPR.

The rescue was successful!  Teddy has fully recovered and has been reunited with Thomas.

Like many heroes, the rescuer disappeared into the crowd when things settled down. Thomas' dad, Ron Levi, is on the hunt for the hero.  The Levi family, at the very least, wants to take the hero out for ice cream.

You'll fully understand when you watch the video:

Posted by Matt Sutkoski at 11:28 AM No comments:

Imagine A January, 2020 Conversation From Yourself 4 Months In The Future

(EDITOR'S NOTE) Fun Update to this post when you scroll down past the video with this first post.

Almost none of us new the coronavirus pandemic would this be horrific and all consuming back in January or early February.

Imagine if your future self, from April 2020 sat down for a chat with you in January, 2020. The future self maybe couldn't give you all the details, but could provide hints.

Julie Nolke did imagine that. So she made a video of her January self hanging out blissfully in her home when the April version of Julie Nolke appears.

How awesome! The January Julie Nolke is going to learn what will happen in her exciting year. But, it becomes apparent that what actually happens is not her ideal version of exciting. January Julie Nolke learns that the giant Australian wildfires (remember those?) will not be the defining image of 2020.

It kind of goes downhill from there.

This video, by the way, was made before the nation erupted in protests over the George Floyd, who was murdered by a Minneapolis police officer in May.  The video probably would have been much different, and darker, had it been made more recently.

In any event, the video is genius. Watch:


UPDATE: Now, Nolke has an update, a darker one, really, of the April self in the video above talkig with her June self.

It's a great video, but to make absolutely sure the new video gets revenue, I'll just have you click on this link.  Proceeds of the video go to the Official George Floyd Memorial fund.

Posted by Matt Sutkoski at 12:20 PM No comments:

There's a series of TikTok clips and YouTube videos that you just HAVE to sample.

It's writer and comedian Sarah Cooper imitating Donald Trump's rantings during news conferences and other events. What makes this so hilarious is her very natural looking but mocking mannerisms that just really hit the funny bone.

They come quickly. Notice early in the video, below,  how she sniffs the Sharpie she's holding.

Or when she's playing with the spray bottle of bleach while touting how that might cure Covid. Or how she quickly puts away that can of Diet Coke when a reporter starts asking questions.

Cooper has said in interviews she's amazed how some corporate types, and people like Trump can prattle on about nothing and people around them pretend they're saying something profound. She's just exposiing the vapidness of these so-called titans in these videos.

She said she purposely dresses as herself and doesn't put on a wig or makeup to look like Trump.  After all, it's the words she's highlighting.

In any event, you have to see Cooper's videos to truly enjoy them.  It's the best parody since Randy Rainbow.  Who, by the way, put out a new video last week called "Distraction." It's to the tune of "Tradition" from Fiddler On The Roof.  So go watch that video, too.

Cooper also parodied the infamous interview between Anderson Cooper and the completely bonkers mayor of Las Vegas a month or so back:

Posted by Matt Sutkoski at 11:58 AM No comments:

So you can forget the pandemic for a moment, here's a mom who was also a 96-year old contestant recently on "Britain's Got Talent."  Fitting for Mother's Day, right?

Posted by Matt Sutkoski at 8:16 AM No comments: