Vermont's Best Mugshot Of The Year 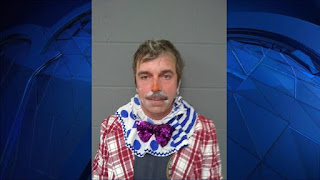 A teenager, home alone in the southern Vermont town of Marlboro, called police at around 3:30 this morning saying there was a strange man in the house, sleeping.

Which led to Vermont's best mug shot of the year, as you can see in this post.

According to NECN and other area media outlets, the strange man in the house turned out to be Sean J. Barber, 43, of nearby Wilmington. Police said they found Barber sleeping in the teen's house, in a clow costume, drunk and possessing cocaine.

So I guess he's in trouble, given the trespassing and drug possession charges he faces.  Definitely a sad clown look, don't you think?

Plus the embarassment of the mug shot, of course.
Posted by Matt Sutkoski at 11:18 AM