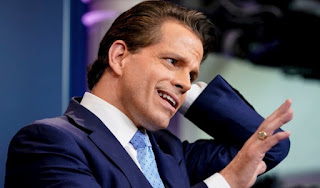 UPDATE: New York Times says Scaramucci already OUT as communications direction. Was only named 10 days ago. That was quick!

In case you haven't seen it, somebody at the Daily Show notices that new former White House communications director, Anthony Scaramucci and Donald Trump, both New York douchebags, also have the same hand gestures while talking.

As the title of this post suggests, watch the two of them conduct their national disaster.

Posted by Matt Sutkoski at 5:58 AM