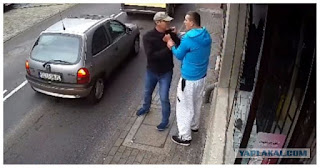 Not entire sure if the video in this post is legit or fake or real, but it proves the adage that sometimes instant karma can strike sooner than you'd think.

Judging from the comments in Polish, I think this happened in Poland. Not sure when. Some idiot decides to randomly start smashing out shop windows.

The window smasher continues his handiwork, and then, decides to run away. And then.........

Posted by Matt Sutkoski at 2:01 PM