Is Outrage Over United Airlines Assault A Revolt Against Corporate Authoritarianism? 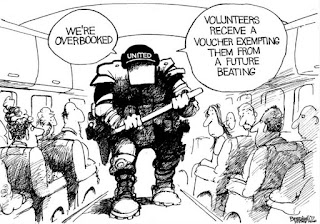 I don't remember the last time an incident blew up so big on social media as that horrible attack by United Airlines on a passenger over the weekend.

As you probably are well aware of by now, United overbooked a flight from Chicago to Louisville, and tried to get volunteers to leave the plane.

Nobody did, so they picked people are random. One guy who had to get back to Louisville objected, so United called in the Chicago cops to beat the crap out of him and drag him off the plane.

That's not how the Orwellian overlords at United would describe the incident, but anyone who has seen the video knows it's true.

This has been building for some time now: Somewhere along the line, a huge swath of corporate America has decided the customers are the enemy, and they have free reign to cheat them, abuse them.

All with the help of Congress, who have been paid off by corporations to pass laws that favor these rich donors and screw the rest of us.  You can steal a lot more money from the boardroom than robbing a person on the street with a gun.

That's why United and all the other airlines can overbook flights and kick people off. It's more profitable, and screw it if you can't make it to Aunt Matilda's funeral in Des Moines.

The United assault on a passenger was the most egregious example of corporate authoritarianism yet, and the explosion on social media, was a giant collective, "I'm sick and tired of this and I'm not going to take it anymore!"

Sure, the extreme public ire was aimed at United. But the force of it was inspired by all of our experiences: Gettting screwed by the 150 pages of legalese in every consumer transaction that only a trademark lawyer can understand. Being forced to wait on hold for three hours or more until somebody at the insurance company deigns to answer the phone, then promptly hangs up on you.

That kind of thing.

The United Airlines assault on this passenger was a master class by United on this PR wording.

First, being beat up and dragged unconscious from a plane is not an assault. It was "re-accommodating," as if United regretfully had to transfer you from one five star hotel to another.

United's hired goons - in the form of the odius Chicago Police - said the man's injuries were because he "fell."  Because being socked in the face enough to knock you over is just your clumsiness, you understand.

Later Monday, United CEO Oscar Munoz blamed the victim, saying he had been "belligerent" for not getting off the plane. In other words, the victim apparently had no right to be upset about being denied something he probably paid hundreds of dollars for - a cramped seat on a flight to Louisville.

You're supposed to be overjoyed to be toyed with by a corporation like United!

As Jimmy Kimmel said last night, imagine going to Applebee's and being forcibly dragged out of the restaurant 20 minutes into your meal because the place was "overbooked." It's the same thing as what happened on United!

Kimmel ran a parody ad from United that was funny because it was so incredibly close to the truth. Not just of what goes on at United but many other grifting large corporations. Here's a quote from Kimmel's United "ad"

"We're United Airlines. You do what we say when we say, and there won't be a problem....If we say you fly, you fly, if not, tough shit. Give us a problem, and we'll drag your ass off the plane. And if you do this we'll beat yo so badly you'll be using your own face as a flotation device. United Airlines: Fuck you."

By the way, check out all the proposed new slogans for United in this link.

I hope the public outrage over United lives on, intensifies and spreads to other corporations who treat the public, the environment and everything else like shit for fun and profit.

People are boiling angry over a lot of things anyway, including how the government is run and how it no longer represents us, but represents corporations.

I'm sounding like Bernie Sanders, but this is exactly why he struck such a chord. He's right. The corporations are running the show, and often doing so in a criminal, morality-free way. The extreme anger at United is a symptom of that.

Let's keep fighting. But not physically, like United does.

In case you need a reminder of how brutal the assault was, here you go: