It didn't take long for that cobra that's missing from the Bronx Zoo to become a beloved national celebrity. 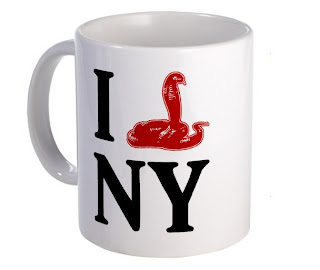 The cobra's Twitter feed is boffo, with over 100,000 followers,  and all the late night comics are talking about him.

On Twitter, our cobra is reporting on his successful tourism gig through the Big City: "I'm leaving Wall Street. These guys make my skin crawl." and "Does anyone know if the Whole Foods in Columbus Circle sells organic mice?"

There's already a lot of cobra merchandise, including the lovely coffee cup pictured in this post.

I know cobras are dangerous, but based on his  Twitter account and the snarky comments from late night comedians, the cobra would be a lovely companion on a tour of the Big Apple. I figure if I just keep feeding him mice, he'd leave me alone. (I have a huge supply of field mice in my tool shed, and I'd be glad to donate them to the cause)

This all will probably end either badly or boringly. I hope the cobra is alright. I also hope he really is enjoying himself. Because there's not many things worse than a crabby cobra.
Posted by Matt Sutkoski at 8:35 AM