A big flurry in the blogosphere this week are the women who are pole dancing for Jesus,  according to MyFoxHouston, a Fox television station in Houston. 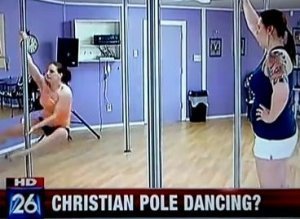 Never thought Jesus was such a randy guy, did you?

Well, he probably isn't, but that's not stopping these women. Every other Sunday, they gather to pole dance to what the ringleader of the group, Crystal Deans says is "upbeat Christian music."

You know, I say go for it gals. The Bible tells us our bodies are our temples. Pole dancing is apparently good exercise, so it keeps you in shape. (Don't worry people, this middle age, male Vermont hick who's writing this is NOT about to take up pole dancing, so relax)

"There's nothing wrong with what I do. I teach women to feel good about themselves, to feel empowered and we get in really good shape. God is the only person that judges so anybody who wants to judge me, feel free to but I'm good with God, so that's what's important tome and I really don't care what people thing," Deans says.

Good for her! As an aside, I am stereotyping when I note that everyone who is a stripper seems to be named Crystal or Tiffany. A woman named Tiffany is quoted elsewhere in the MyFoxHouston article. Just noting that.

Actually, I love some of the other headlines in the MyFoxHouston Web site, which really shows that the Houston area is a unique part of the world. One headline reads "Monster Truck Kills Woman in Strip Club Parking Lot," while another says "Pastor Calls Flock Devils, Demons."

I wonder if all three articles are somehow related, other than the fact they all happened in the Houston metro area?

Anyway, I would say that I am now inspired to find another creative way in my life to praise Jesus. But this is a family blog, so I won't go there.

Posted by Matt Sutkoski at 3:01 AM