One Michael Baker thought it would be fun to go to a police cruiser in his little town in Kentucky, siphon gas, or at least pretend to, while his friend took a picture of him doing so, and flipping the bird simultaneously. 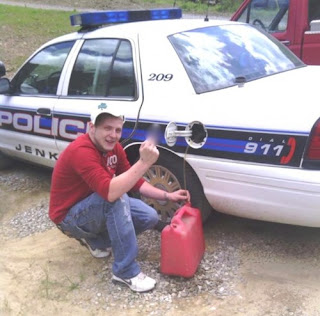 Such a photographic gem that he put it on Facebook for all the world to see. The world did see it, including the Jenkins, Kentucky Police Department, whose police cruiser was involved.

So it was pretty easy for the Jenkins Police Department to nab their man, our Michael Baker on misdemeanor charges, according to The Smoking Gun Web site.

Everyone seems to agree Baker was pretty dumb. And they're right, seeing how easy he made it for the city of Jenkins' Finest to catch him.

Hmmm, Facebook as a law enforcement tool. Seems I've read of several criminals putting their exploits on Facebook, or witnesses take videos and put them on YouTube, so our police departments probably no longer have to go out and you know, chase suspects. They can kick back in their offices, or homes in their PJs and just surf Facebook and YouTube and Twitter and Pinterest all day. The crime rate will just keep sinking as a result.

I wonder if the police department where I live is hiring. Sitting at home all day snooping around Facebook and YouTube? How easy is that?

For his part, Baker's Facebook page is still up, but he's taken down the incriminating photograph. (It's in this blog post, though)

He seems a little shell shocked by his newfound celebrity. He is all over the news and the Internet, so he's now almost as famous as Lady Gaga or Justin Beiber. Just not nearly as rich, despite the fact he got his hands on a little expensive gasoline from the police cruiser.

I guess he's just a kid, 20 years old, who could use a little learning and life experience. And maybe he could take English as a second language class to improve his grammer. Notice the banner on his Facebook page reads "Hate me for who I am. Don't love me for who I ant."

Ant? He considers himself an ant? He ruins picnics? I'm confused. Then again, so is Baker. He does have plenty of defenders writing to his Facebook page, saying it's cool to mess with the police, or sympathizing that he just didn't think things through.

Baker wonders why everyone is making a fuss. He writes, "OMG, people. It was just a joke."

Maybe, but I hope your coal mining job pays enough to cover your attorney's fees. Or maybe you could sell the gas you might have stolen to pay the fines or whatever.

Still, I'm looking forward to more photographic wonders from people like Baker, so keep 'em coming folks.!
Posted by Matt Sutkoski at 8:04 AM