Parents Ruin Everything, Including Easter

It seems some parents, wanting to give their children every advantage, of course, raided the field where the eggs were to retrieve them for their spawn, so that the kids could feel good about collecting the most eggs. Or something. 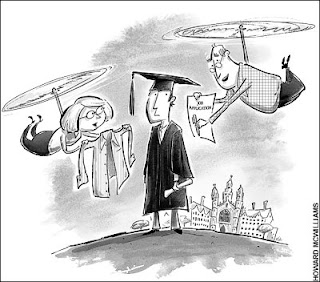 The article refers to "helicopter parents," the ones that hover and do everything for their kids, micromanage them, make all their decisions, I guess it's to insulate them from the normal bumps and bruises of life.

Each generation of parents makes some sort of trendy mistake. I guess helicopter parenting is this generation's burden.

I know I'm preaching where I have no qualifications. I'm not a dad myself. And I've always said I think child abuse is appalling, so therefore I'm not a parent.

But I have to wonder if there's so many kids whose parents did everything for them, intervened everywhere for them, how will they fend for themselves?  Some don't ever stop, as I hear stories of parents accompanying adult children to job interviews, college classes and the like. But that doesn't leave the kids looking so impressive, does it?

Plus, when these parents are gone and the adult fledglings are lost at sea for not being able to live on their own, will it be old, childless farts like me who have to step in to the parenting role at work, on the street, in my neighborhood?

What if these people end up so dependent, so incapable of making their own decisions because they never learned to, that we can't count on them for anything?
Posted by Matt Sutkoski at 3:19 AM