Photographer Richard Evans was lucky enough to be trekking through Patagonia. 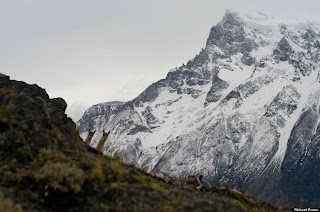 At one point, he encountered a spectacular scene of snow capped, dramatic mountains and rocky scenery.

It was the perfect setting for a photograph and he busied himself setting up his tripod to shoot.

Drama turned to humor as he got totally photobombed by some animals called guanacos, which are similar to llamas.

The photobomb made the picture so much better. (As usual click on the image to make it bigger and more easily viewed)
Posted by Matt Sutkoski at 5:27 AM