A Man Living In Ohio To Remain Dead, Says Judge 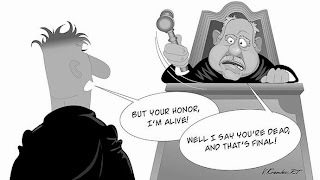 He was sitting alive and well in an Ohio courtroom the other day, but he was dead then, too. He's been dead since 1994, even though he's been alive all that time.

Confused? I think he is, too.

Here's what happened: Miller disappeared in the early 1990s, abandoning his kids, his whole life, everything.  Since nobody could find a trace of him for years, his ex-wife had him declared dead by a court in 1994 so she could collect Social Security benefits for their children.

Lo and behold, Miller recently turned up, and he asked a court to reinstate his Social Security number and maybe his driver's license so he could go on with his life, such as it is.

According to the Courier of Findlay, Ohio, the judge told Miller, basically, sorry, nope, you're still dead.

The judge said yes, he knew that Miller is alive in reality, but in the eyes of the law, he's dead, because you can't legally reverse a death declaration after three years.  The judge accurately noted this is a strange case.

Miller's ex, by the way, does not want Miller to come back alive, at least in the eyes of the law. She said he is declared alive, then she'd have to pay back the Social Security benefits given to her children, and she doesn't have the money.

So don't disappear and pretend you died mysteriously. Because if you ever want to come back to life, you might not be allowed to.

Posted by Matt Sutkoski at 4:35 AM