The weirdest things make me laugh. 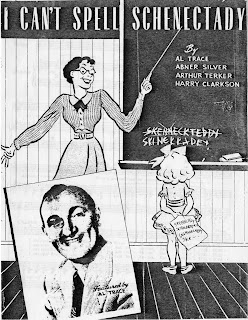 Which is why I lost it on the way back home from Rutland, Vermont last night when on the radio came amazing old song from 1953 called "I Can't Spell Schenectady"

(Is Schenectady spelled correctly in this post? I'm not sure)

Weirdly, this is the second time this week Schenectady, a relatively charmless city near Albany, New York, has come up in conversation with my husband Jeff.

For some reason, I remarked to him, when Schenectady was mentioned on the news last week, that it's a wicked fun word to say over and over. At least for me. Do it. Say if fast, repeatedly. It's pronounced ske-NECK-ta-dee

Anyway, in the Jeep last evening, we were listening to a radio show on Vermont Public Radio called "My Place." It's hosted by a revered Vermont radio DJ named Joel Najman, who's been in the business since the mid 1960s.

"My Place" features lots of golden oldies tunes,  many of which you haven't heard in a long time, or often have never heard. Najman always has an very interesting story behind each song he plays.  So listen to "My Place" when you get a chance. It's fun.

Last night's "My Place" featured songs with place names in their title Among them were "Abilene," "Sioux City Sue" and something truly bizarre called "The Cincinnati Dancing Pig."

But the highlight of "My Place"  last night was "I Can't Spell Schenectady."   I've had the tune in my head all day. Is that a bad thing?

So, just for weirdness, here's the admittably scratchy bizarre song on YouTube for "I Can't Spell Schenectady"