Some Congress Creatures Are Profoundly Mentally Ill, And We're All Suffering For It.

A few relatively sane people managed to save the nation from an economic crisis with the budget deal last week,  so maybe, just maybe,  the inmates aren't running the asylum.

But don't count on it. We haven't heard the last of that awful contingent in Congress that is profoundly mentally ill.

Think about it. The strange Tea Party wing that shut down the government and almost caused a global recession live in their own alternative reality where facts are besides the point.

They just make up their own facts. It's more fun that way.

They are so narcissitic that they expect the rest of the country to bend to their will, no matter how crazy their ideas and how many people oppose them.  And they delight in dragging the rest of us into their sad, twisted psycho drama.

Most people base their decisions on the facts in front of them. Since everybody's different, people will  respond to the facts in various ways. That's why some politicians take a liberal course and others react in a conservative fashion when dealing with the facts, with reality.

That's fine. Eventually, the liberals and conservatives, using the facts as a guide, will argue a bit then work out some sort of compromise.  In the real world, maybe sane conservatives and liberals each have ideas that might improve Obamacare, improve the economy, improve our lives. Each side is worth listening to.

However, the mentally ill Congress creatures, mostly Tea Party, that precipitated this mess didn't like the facts, so they just created their own reality, by retreating to their own bubble, brought to them by Fox News and lobbying groups like the ironically named Americans For Prosperity. 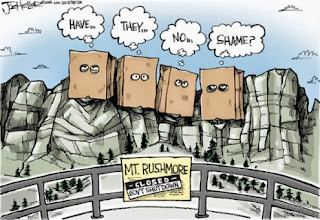 So now, instead of dealing with facts, they think the economy won't suffer because they decide not to pay the nation's bills,  that shutting down the government will somehow lead to cost savings when in the real world it's worsening the deficit and made our economy take a $24 billion hit, that everybody supports them when in reality all the polls show most Americans really, really, really hate them.

Plus, they've gerrymandered their Congressional districts so much that they preside over what I might call weird shaped Tea Party ghettos.

The alternate reality these Congress creatures live in is fed by a weird media and lobbying apparatus that tells them  our socialist terrorist Muslim Kenyan not legitimate president  put down his Quran, stop taking our guns away, and stop sending cash to terrorists, everything will be OK.

It's why demonstrators, OK, one demonstrator, during a protest amid the shutdown decided to wave a Confederate flag in front of the White House, prompting  journalist Jeff Goldberg to Tweet:

"In many parts of America, waving a Confederate flag outside the home of a black family would be considered a very hostile act."

Note: Right now it's hard right conservatives who have this mental illness. But it can afflict the hard left, too. Chemtrails and 9/11 conspiracy theories, anyone?

Bottom line: That Congress creatures that created this mess are clinging to a fantasy world  is one sign that something is weird mentally. And they insist, are convinced they are right, that they are our saviors, that everyone else is wrong, and we should do whatever they say, no matter what people in the real world think 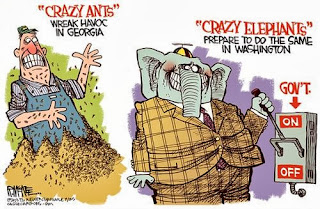 Which brings us to the next aspect of this mental illness:

Narcissism and No Responsibility:

The whole episode brought us a lot of weird moments that demonstrated this aspect of mental illness.

That's why we had one Congress Creature, Randy Neugebauer,  yelling at a park ranger for closing a national monument that HE helped close and the ranger had nothing to do with. We had another one, Lee Terry of Nebraska saying he wouldn't give up his salary during the shutdown, so that he could afford his "nice house."   (Both later apologized after the expected horrible press)

And we had another one saying the Democrats had to give the Republicans lots of concessions, because, well, they have to.

"We're not going to be disrespected... We have to get something out of this. And I don't know what that even is," said Marlin Stutzman, R-Ind. early in the shutdown.

Yeah, he didn't know what, but they have to get something to be respected. Um, don't you have to earn respect?

Not all Tea Party and strongly conservative lawmakers are afflicted with this mental illness, of course. I heard one Tea Party Congressman from Virginia speak on NPR the other night who gave all the Tea Party talking points, but opposed the past two weeks of shenanigans because it harmed the country, didn't get them what they want, and avoided what he sensibly called "principled compromise."

Another conservative, Peter King, a conservative Congressman from New York who does not appear to be affected by this mental illness, was moved to say this last week:

"The party is going nuts.... So many people I run into who are normal people--and I hate to use that term--just don't understand what is going on."

To understand what's going on, what King and the rest of us should do is just examine U.S. Senator Ted Cruz, R-Texas, who is widely considered the ringleader of this debacle.

He's the one that did that weird, pointless 21 hour speech as the shutdown loomed railing against Obamacare. During the shutdown, he kept insisting he and the GOP were "winning" the fight, despite plunging poll numbers.

And when it was all over the other day, when Senate Republican Leader Mitch McConnell was saying a deal had been reached, Cruz tried to steal the media spotlight outside at that very moment saying he'd fight on

And Thursday,  Cruz said Thursday he wouldn't rule out causing another government shutdown to stop Obamacare.

So they're all delusional. The sad thing is, had more sane people who oppose Obamacare, who have different ideas on how to coax the economy along, they might have made some progress had it not been for the crazies.

And the economy, Americans, wouldn't have suffered as a result.
Of course, the whole point of trotting out these crazies is to make barely less crazy right wing ideas seem a bit less off the wall, thereby making them acceptable to us.

Hey, sequestration, which use to be regarded as completely off the wall, seems like the norm now.

Obviously, I have no good ideas on how to get out of this mess. I'm not a psychiatrist, so I can't fix Congress. I don't think anybody can. That's the disheartening thing about living with someone with a mental illness.

You're trapped in their chronic, sad condition.

All you can do is make jokes about it. The Onion had it right with its story last week about a broken sewer pipe. You've GOT to read it to make you feel better. (click on this hyperlink)
Posted by Matt Sutkoski at 5:51 AM